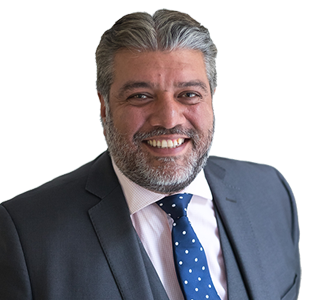 ‘Great at communicating with different types of clients. He gets on their level and really engages with them.’

His early elevation to silk shows how he has been recognised by professional clients, lay clients, Judges and his peers as a barrister who can skilfully deal with the most diﬃcult of cases. His ability to assimilate vast amounts of information and break it down and quickly pinpoint the real issues and then present them in a clear concise manner is brilliant.

Anu also handles general criminal cases, having acted for defendants indicted on terrorist charges, murder and people smuggling. He has also been instructed on a number of high-profile cases including the Tilbury Docks people smuggling and the Ben Stokes case, both for the criminal charges and the disciplinary tribunal. This case attracted extensive media coverage.

He has a hard-working nature and an eye for detail. He is a skilled advocate, with a strong courtroom presence. He works well with both professional and lay clients, using his engaging manner to great effect.

Anu has a medical background, which gives him an advantage when acting for clients in criminal cases in which medical experts are involved, including Murder trials and acting in the M25 serial rape trial. His sporting background enables him to have an insight into the clients and professional bodies thinking when dealing with sports disciplinary cases. He is a qualified Arbitrator and Mediator and is fluent in Punjabi, Hindi and Urdu. He is a keen sportsman; cricket being his main sport, which he played professionally in his earlier years. Not only does he play for the Bar team but has turned out for the famous Lashings World XI and the MCC.

‘Great at communicating with different types of clients. He gets on their level and really engages with them.’

‘Anu is an exceedingly persuasive advocate, both with judges and juries. He is supremely analytical, prepares well for all eventualities and thinks quickly on his feet. A silk who constructs logical and cogent legal arguments.’

‘He has an uncanny ability to put a client at ease from the moment he steps in a room. He slowly, but calmly chips away at the case with impressive results. He is a very safe pair of hands, and has a wealth of experience.’

Anu has successfully represented a number of defendants charged with serious Corporate Criminal Offences. He was instructed as Junior Counsel in the highly publicised Operation Jasmine which involved the investigation into the Corporate Manslaughter and Negligence of patients in Care Homes in South Wales.

Anu is regularly instructed in all areas of Fraud and Financial Misconduct matters. He has represented clients including bank employees accused of misappropriating confidential information to carry out fraud, to matters of extreme complexity involving manipulation of company share prices as well as clients charged with cheating HMRC. Having dealt with high profile cases within the fraud field, including Money laundering, Mortgage frauds and NHS and procurement frauds. Often acting as leading junior.

Many of these cases have involved multiple defendants and required the detailed analysis and presentation of thousands of pages of evidence.

Anu has represented clients in multi-million pound POCA and asset recovery proceedings, dealing with cross boarder and jurisdictional issues that regularly arise in those cases.

Anu has been involved in a number of regulatory matters, including providing advice to and representing clients involved in Health and Safety Executive investigations, as well as undertaking Bribery Act training to companies in light of the 2010 legislation. He has provided advice and guidance to UK based companies with operations in perceived vulnerable geographical locations to ensure their compliance with the legislation.

Anu regularly provides advice and representation to professionals accused of misconduct. Owing to his background in medicine, Anu has provided advice and assistance to Doctors facing disciplinary action. He has appeared before Disciplinary Panels including the General Medical Council.

Anu has a particular interest in Sports Law and the laws pertaining to sport. Anu has experience of representing players at disciplinary hearings before their governing bodies and providing advice in associated regulatory matters. Having played a high level of sport himself, in both rugby and cricket, Anu has an insight into workings of the changing room, as well as the nuances and pressures of the world of sport. Anu also provides advice on player contracts, and his training as a mediator and arbitrator means he is able to provide effective assistance in contract disputes and negotiations.

R v T – Leading Counsel in one of the largest drugs importation conspiracy’s ever in the UK. Tons of drugs imported across various jurisdiction. The drugs value is in excess of £4 billion.

R v S – Leading counsel or the first defendant in an ICO prosecution for the unlawful obtaining and disclosure of data, contrary to the Data Protection Act.

The defence mounted a legal argument that the construction of a statutory ‘defence’ in section 55 of the Act must be an objective, not subjective, test, with retrospective knowledge being allowed.

The judge held that the test was indeed objective. This led to the ICO offering no evidence against all defendants on the second day of trial.

ECB v Stokes – Counsel for Ben Stokes at the Cricket Disciplinary Commission, in the proceedings brought by the ECB following the well-publicised incident at Bristol. Ben Stokes and Alex Hales were both charged with bringing the game into disrepute.

R v Huggett – Leading Junior counsel for a defendant in a multi-handed procurement fraud against Belron PLC and the Metropolitan Police.

R v Lunn – Leading Junior Counsel in an accounting fraud. The defendant was employed by an accountancy practice and was accused of falsifying tax returns on behalf of clients and submitting them to HMRC.

R v McGlinchey – Leading Junior Counsel in a people trafficking case. The defendant was charged with facilitating the smuggling of illegal immigrants into the UK in a container.

R v Harding – Junior counsel for a defendant in the largest counterfeit pharmaceutical fraud ever prosecuted. The Defendant was accused of a conspiracy to import and distribute counterfeit medicines. The fraud caused the largest class one recall of drugs supplied, Sanofi Aventis, Astra Zenica and Eli Lilly, from the open market in history. (Operation Singapore)

R v Mohammed – Junior counsel for the defendant charged with three other men of murder of a takeaway delivery driver in an alleyway behind his place of work. (Operation WIGAN)

R v Saleem and others (Terrorist) – Junior Counsel for a defendant (Omar Zaheer) charged with fund raising for terrorism and for inciting murder. Case heavily publicised as involved the preacher Omar Brooks. Omar Zaheer was acquitted of the charges brought against him. All other Defendants found guilty following a 4 month trial.

R v Hill and others – Junior counsel on a multi-handed conspiracy to supply drugs with a £100 million money laundering.

R v Goldring – Counsel for the defendant in a multiple million pound Barclays Bank fraud where bank accounts had been hijacked using inside information obtained from bank employees. The money was then sent offshore and dissipated. The Defendant was acquitted of all charges against him.

R v B – Junior Counsel for the defendant in a share fraud. Company was floated, SFO claim that share price artificially inflated. Fraud worth £30million.

R v D – Junior Counsel for the defendant in a nursing home fraud, which is linked to allegations of corporate manslaughter as a result of the fraud. (Operation Jasmine)

– Junior Counsel for the defendant in a serial rape case. (M25 rapist)

R v Rana and Others – Counsel for a defendant in a multi-handed conspiracy to defraud. The case involved false invoicing of transport companies to obtain fraudulent VAT.

R v Izzet and others – (Operation Ninjask) – Counsel for defendant (a solicitor) charged within a conspiracy to defraud the revenue of PAYE and the firm was involved within the fraudulent application of visas via sham marriages.

R v Buxton – Counsel for the defendants in a multi-million pound conspiracy to defraud Barclays Bank by hijacking accounts and withdrawing the money.

Singh v Laing O’Rourke – Counsel for the claimant in the Heathrow terminal 5 accident, where a cantilever apparatus broke killing one and seriously injuring another.

HMRC v Life Enterprises – Lead Counsel in a VAT tribunal appeal. Case involves the withholding of input tax, on the basis that the defendant was contra trading in mobile phones, part of an MTIC.

R v Dixon – Junior counsel for the defendant in a large conspiracy to supply class A drugs. The drugs were imported then shuttled around the country using coffee cans.