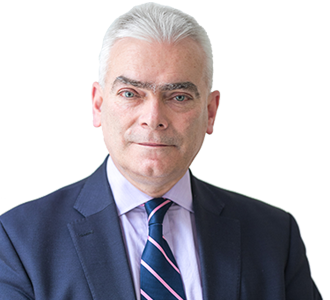 “”The man has the most incredible mind – his ability to analyse a case is second to none.”

John McGuinness is a recognised leader in advising public bodies and companies on a wide range of criminal and regulatory matters, including corruption, terrorism and disclosure. He is retained as leading counsel in cases such as those concerning allegations of multi-jurisdictional tax fraud. He is noted for his strong work ethic and persuasive advocacy style.

Conducts a wide range of appellate work, including: Appeals against conviction and sentence, Judicial Review; Appeal by Case Stated. He is regularly instructed in the High Court, Court of Appeal and Supreme Court in cases of criminal law, public law and human rights.

He has a wealth of experience in prosecuting and defending the most serious matters in the Crown Court including: Homicide, fraud, corruption, insider dealing and asset confiscation.

“Exceptionally bright” he is “fantastic and very hard-working”

“richly talented he finds nothing complicated”

Mackinlay & Others – [2018] – Court of Appeal and Supreme Court: Definition of election expenses

R v Jogee – [2016] – Supreme Court: Landmark ruling on mental element necessary for secondary party to be guilty of murder which abolished common law test of foresight as the necessary main reason for murder and other crimes of specific intent

R v Neuberg (No.2) – [2016] CA (Crim): Confiscation; offences committed in connection with the running of a business through a company

R v Tanev & Others (Operation Estuary) [2018] – Importation of firearms across Europe into the U.K

R v Mirza and Taheer [2017] – Leading counsel for the prosecution, responsible for presentation of the case (via timeline) where defendants of all the same family were convicted for preparing acts of terrorism. Substantial evidence in this case was sourced from electronic media.

R v Chapman – [2016] Bribery of leading official at Nigerian mint by employee of contractor. On the day the Jury were due to retire, wide spread reporting by the Prime Minister of the corrupt nature of Nigeria led to an application to discharge the Jury and subsequently appeal against conviction