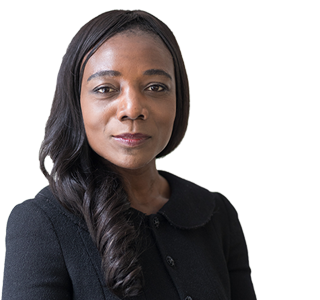 “Able to handle the full gamut of serious crime cases.”

Mary Poku is frequently instructed in high profile murder cases. She was leading counsel in the fatal stabbing case of 17 year-old Shauquan Fearon, in SE1 in September 2015. Her client, who faced two murder counts, was acquitted of attempted murder in the initial trial, and eventually no evidence was offered after two retrials in 2016. Her practice also covers fraud cases, like the highly publicised “Bank of Terror” case involving 12 defendants who allegedly defrauded senior citizens to fund ISIS in Syria. Appointed as legal advisor on the National Crime Agency’s cybercrime initiative in Ghana  (2014), she advises international Shipping companies and airlines on asset recovery and forfeiture.

Able to handle the full gamut of serious crime cases”

“Her success rate has been outstanding”

Central Criminal Court- R v. D & S
Mary Poku led in this three-count murder case concerning two 15 year-old defendants. The victim, Shaquan Fearon, was stabbed outside flats in Brockley in front of onlookers and his best friend, who sustained a serious wound. Mary Poku’s client was acquitted of attempted murder in the initial trial and no evidence was offered on the murder count in relation to the deceased. Several witnesses gave evidence after investigating officers obtained video recorded interviews of several significant witnesses. The case raised complex issues of fact and law, including the testimony of anonymous witnesses, Hearsay evidence, the admissibility of low copy DNA.

Central Criminal Court- R v. M
Mary Poku was led in this classic “who done it murder” case. The motive for the murder remained uncertain until the conclusion of the trial. The call to the police referred to black youths fighting in the immediate area. The 999 caller witnessed two black males man-handling the victim into the back of a car. The victim was taken to hospital and underwent open-heart surgery, as he had punctured lungs. The crown dropped the murder count to Manslaughter on the first day of trial and the defendant was ultimately acquitted at the conclusion of the trial.

St Albans Crown Court – R v. F & Others – St Albans Crown Court
Mary Poku acted as Leading counsel in this 6-week case for one of five defendants on a charge of conspiracy to murder, prosecuted by Queen’s Counsel. Mary Poku’s client, alleged to be one of two gunmen who shot the 55 year-old victim, was found not guilty by unanimous verdict. The motive for the attack, as suggested by the prosecution, was the perceived unjust acquittal of the victim’s son, of the attempted murder of the first defendant’s brother, one week before the shooting.

Central Criminal Court- R v. E and others
Mary Poku was Junior counsel for the defendant on a charge of murder, upon which no evidence was offered after legal argument. She then went on alone to represent the defendant, who was acquitted, on a linked perverting the course of justice charge. The charge alleged that the defendants had threatened potential witnesses who could have given evidence about the shooting of a young man. The threats, made via the lyrics on a rap music video, which were deemed threatening, were made whilst the defendants were on bail for the murder allegation. It was alleged by the prosecution that the defendants were associated with the MDP, a notorious west London gang.

Central Criminal Court – R v. M & 6 others 2011
Mary Poku was junior led by Queen’s Counsel in this 7-handed murder trial. Operation trident officers investigated this case involving two shootings in one night in South London. Several complex legal submissions were made throughout the trial by various defence teams involving witness anonymity, section 114 and 116 of the Criminal Justice Act 2003 applications regarding absent witnesses, expert witness testimony, particularly with regard to cell site evidence and the admissibility of covert recordings of telephone calls made by the defendants whilst they were in custody. As Junior Counsel, Mary Poku cross-examined key witnesses during the trial in the absence of her leader. The case received wide media coverage.

R v. A & 11 Others
Mary Poku represented one of twelve defendants alleged to be part of an organized criminal network involved in an industrial scale conspiracy to commit fraud. Code-named “Bank of Terror” by the press, there were substantial six-figure gains for the alleged fraudsters. They left many devastated and traumatised elderly and vulnerable victims between the ages of 69 and 82, most of whom lost their entire life savings. The proceeds of the frauds were allegedly sent to Syria to fund ISIS.

Luton Crown Court – R v. M & Others
Mary Poku acted as Leading Counsel in this 6-week multi-handed conspiracy to defraud case. The case involved the fraudulent use of stolen credit cards used to obtain 40 cars from garages throughout the country for twelve months. The fraud also necessitated the deception of a number of companies including ebay and Auto Trader.

Southwark Crown Court – R v. B
Mary Poku represented a bank employee who was charged with laundering approximately £60,000 from the department for work and pensions. He was acquitted by a majority Jury after a number of flaws in the banking system were exposed during cross-examination on behalf of the defendant.

Luton Crown Court – R v. A
This case was a large-scale multi-million pound fraud case. A company was trading as Swift Insurance. The case received wide media coverage. Mr Ahmed’s case resulted in a plea and a non-custodial disposal.

Woolwich Crown Court- R v. Q
Conducted a 10-day trial representing a defendant charged with conspiracy to defraud. He was a senior council official for the London borough of Greenwich. Provided friends and relatives with the death certificates of individuals in order to facilitate the use of the information contained within the certificates to commit various financial frauds.

R v. N and others – Isleworth Crown Court
Mary Poku represented a defendant who was first on the indictment in this case. Three defendants were charged with conspiracy to import £3 million worth of cocaine. The first trial resulted in a hung jury followed by retrial that resulted in an acquittal.

R v A & Others
Mary Poku represented one of nine men acquitted on 13th September 2013 of conspiracy to rape a 14 year old girl and other charges of serious sexual assault after the girl’s second twitter account was discovered following three days of legal argument at the Central Criminal Court. The disclosure of the twitter accounts was as a direct result of defence counsel’s detailed disclosure request list, which included a request for all communications within the social media network, between the complainant and the defendants. Originally scheduled to last eight weeks before Judge John Bevan QC, the dramatic conclusion of the case made front page headlines in Metro and the Daily Mail.

Kingston Crown Court – In R v. R
Mary Poku was led by Queens Counsel and represented the defendant who was charged with raping four of his biological daughters over a four year period when his children were aged between 7 and 12 years old.

R v. GB – Snaresbrook Crown Court
Mary Poku was led by Queen’s Counsel in this case concerning the systematic abuse of four children, aged between 7 and 10 years. The defendant targeted vulnerable children including a paraplegic girl who needed special equipment to speak. She was a model for Mencap at the time of the abuse.

R v. A and A – Southwark Crown Court
Represented the husband in this case concerning a Hungarian couple that was charged with living off immoral earnings. They set up several brothels across London and made millions. This case also received extensive media coverage as a large number of their client list included members of the establishment.

Southwark Crown Court- R v. I & 3 Others
Mary Poku represented this defendant, who was charged with conspiracy offences in relation to the kidnap, false imprisonment, robbery, GBH and possession of a firearm. The victim was threatened, assaulted and tied up. His bankcards were forcibly taken from him, as were his clothes, his phone and £80-£100 of cash he had on him. He was punched and slapped. His PIN numbers were repeatedly requested from him and a gun was jabbed in his face, causing it to accidentally discharge. The victim had numerous injuries as a result. The defendant was only convicted of false imprisonment and acquitted of all other charges.

Inner London Crown Court – R v. Crosdale & 6 Others
Mary Poku represented a 15-year-old victim who refused to be cross examined by all 7 defence counsel after his ABE interview had been played as his evidence in chief. Mary Poku had to consider c whether to exclude his evidence in chief as inadmissible Hearsay evidence or by virtue of sec 78 of PACE and article 6 of the ECHR Act on the basis that her client could not have a fair trial. Mary Poku made submissions as part of an abuse of process argument that did not succeed at the start of the trial, but strengthened her half time submission, which was upheld.

Mary Poku is instructed by an airline in this international asset forfeiture case. She advised on the recovery of funds paid by ASKY as a result of a fraudulent email purporting to be from an airline, providing bank account details for monies owed by ASKY to the airline. ASKY were in possession of the bank account details, which indicated that a bank in England received the funds. It is anticipated that an ex-parte application will be made in the High Court to freeze the funds, once traced. The application will trigger anti-money laundering obligations on the part of the bank.

Mary Poku has been instructed to represent Pharmacists brought before a disciplinary panel by the General Pharmaceutical Council for various misconduct allegations including dispensing errors, failing to maintain appropriate SOPs and management of employed staff.

R v. Leon Russell [2011] EWCA Crim 49. In the Central Criminal Court
Mary Poku was led by Queen’s Counsel in this attempted murder case. The complainant lived, despite being shot 14 times. The defendant initially received a 15-year IPP sentence which was subsequently appealed by the prosecution.