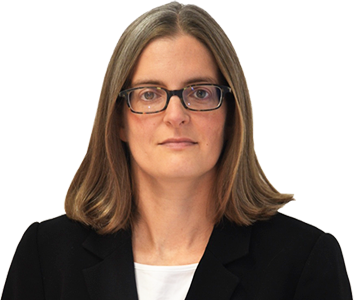 Rebecca is a specialist Criminal advocate who prosecutes and defends in a wide range of cases.  She is regularly instructed in proceedings involving allegations of serious sexual offences, assaults, robberies, and drugs offences.  She acts for local authorities, prosecuting fraud and money laundering offences as well as infringements of the Consumer Protection from Unfair Trading Regulations 2008, breaches of planning enforcement notices and contraventions of the Food Safety and Hygiene (England) Regulations 2013.  She also has experience of prosecuting and defending in confiscation proceedings.

R v PK (CPS, junior, 2019) – the defendant was extradited from Denmark to face historic allegations of rape, buggery, indecent assault and indecency with a child in respect of two complainants.

R v PV & JC (LB Bromley, 2017) – frauds on elderly women, several of whom came forward after an episode of Watchdog.

R v MA, XK and SS (CPS, 2017) – Possession of an imitation firearm with intent to cause fear of violence and attempted robbery.

R v AJ (LB Bromley, Trial, 2016. POCA, 2017) – fraud and contravening the Consumer Protection from Unfair Trading Regulations 2008 in relation to the owner of a dance school.

R v LR & JR (LB Bromley, 2016) – conspiracy to defraud in which an elderly man was inveigled into gifting his house to cold-callers.

R v Recycled Materials Supplies [2017] Env. L.R. 29 – For the Respondent in an appeal against convictions for contravening environmental permits. The case turned on whether the London Borough of Newham or the Environment Agency was the regulator and whether there should be dual regulation of a waste operation. (Led by Stephen Tromans QC in the Court of Appeal).
Page load link
Go to Top