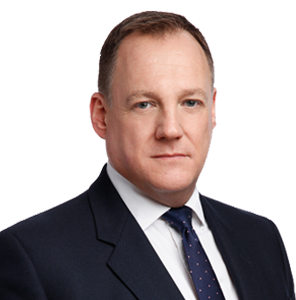 Robert is a specialist criminal practitioner who started out at the independent Bar at 3 Temple Gardens, then at 2 Dyer’s Buildings, now Drystone Chambers, prosecuting and defending the broad spectrum of criminal work. Since 2010 Robert has been employed by Shearman Bowen & Co, a leading City of London white-collar crime firm, as in-house counsel where his practice was revolved around Southwark Crown Court and the Central Criminal Court. He is regularly instructed as leading, led and sole counsel, defending both private and publicly funded clients charged with the full spectrum of serious criminal work.

Represented one of 8 defendants charged with a conspiracy to launder in-excess of £150 million, the proceeds of drug trafficking. The allegation concerned the abuse of multiple third-party bank accounts by a Chinese organised crime group.

Operation Jericho – Client charged on an 8-handed indictment with a multi-million pound MTIC fraud revolving around the trade in waste precious metals.

Operation Banktime – Client charged on a 2-handed indictment with a multi-million pound vishing fraud and money laundering. The pro-active investigation was a joint operation between the Metropolitan Police, Police Scotland and the National Crime Agency. The case involved the deliberate targeting of small businesses, because they were likely to have unsophisticated security measures in place, with telephone calls, supported by the deployment of sophisticated telephone software to ‘Spoof’ the companies into believing that the caller was calling from their bank to intervene in what was claimed a fraud taking place on their bank account.

Represented a client charged on a multi-handed indictment with conspiracy to defraud involving the alleged systematic defrauding of customers of two motor vehicle engine remanufacturing companies, set up as vehicles for fraud.

Represented a Client charged in a private prosecution with 13 historic counts of obtaining money transfers in-excess of £20 million by deception, in relation to events that dated back to 1999. Described at the time of the trial as the largest ever private prosecution brought to trial.

Represented a client charged with offences under the Financial Services and Markets Act 2000. The case concerned allegations of providing financial advice to high-net-worth individuals when not being authorised by the Financial Conduct Authority.

Operation Marshbrook – Represented a client acquitted of murder, following the shooting of the deceased in a crowded night club in a drug related turf war. Named by an eyewitness, the case turned upon the close examination of hundreds of hours of closed-circuit television footage and undermining complex cell site and ballistics evidence.

Operation Adako – Advised and represented a private client on an appeal against conviction for Murder. This appeal concerned multiple strands of fresh evidence including alleged confessions made by the co-defendant, a witness anonymity order and the digital reconstruction of the scene based upon the principal eye witness’ evidence at trial.

Operation Leysters – Represented a client acquitted on a 3-handed murder arising out of a classic joint enterprise stabbing.

Operation Fortescue – Client acquitted on a three-handed murder. The deceased was murdered whilst asleep in his bed next to his girlfriend at the hands of a group of males armed with machetes. The evidence comprised a complex matrix of circumstantial evidence which included a vast quantity of call data, cell site evidence, low copy mixed profile DNA and complex bad character issues relating to a multitude of suspects not charged. All three defendants were acquitted.

Conspiracy to Cause Explosions

Represented a client who was the first defendant on a multi-handed indictment alleging conspiracy to cause explosions. The case concerned the construction, delivery and detonation of pipe bombs at a series of residential addresses, arising out of a feud between former business partners. The evidence included an alleged prison cell confession, covert recordings of the client’s conversations with friends and family whilst on prison visits, a vast quantity of call data, cell site analysis, hundreds of hours of closed circuit TV footage and expert image enhancement.

Client charged with arson with intent to endanger life and doing acts tending and intended to pervert the course of justice. This case concerned the setting of a deliberate fire causing extensive damage to a retail outlet at which the client was an employee. The client’s defence involved implicating the principle prosecution witness. The client was exceptionally vulnerable, having been previously undiagnosed as being on the Autism Spectrum and was acquitted following the instruction of a dual qualified Clinical and Forensic Psychologist.

Operation Arana – Client charged as a member of an organised crime group with conspiracy to cultivate and supply cannabis on an industrial scale. The investigation spanned a 5 year period and involved a covert surveillance operation.

Operation Bastinado – Client charged on a multi-handed indictment, with a multi-million pound conspiracy to supply class A and B drugs and money laundering. The client was a vulnerable defendant and was twice severed from trials of other defendants. The evidence included an extensive surveillance operation and the deployment of directed surveillance resulting in the generation of hundreds of hours of covert audio recordings. The trial gave rise to issues arising out of the execution of unlawful search warrants resulting in application by the Crown under section 59 of Criminal Justice and Police Act 2001 to retain evidence which had been unlawfully seized in order to prosecute this defendant.

Represented a client alleged to be the head of an organised crime group running a conspiracy to supply class A drugs across a major urban conurbation. The investigation involved a proactive 7 month covert operation involving surveillance and the deployment of a listening device generating significant audio transcripts said to evidence conspirators actively engaged in the supply of class A drugs.

R v B – Client acquitted of two counts of rape made by independent complainants.

R v NB – Client charged with assault by penetration, grievous bodily harm with intent and controlling and coercive behaviour. The allegations arose out of an extremely volatile relationship against a background of the client having been convicted of similar offences against previous partners which were admitted as evidence of his bad character. Client was acquitted of the assault and GBH offences.

Perverting The Course Of Justice

Represented a client acquitted of attempting to pervert the course of justice on a three-handed indictment on which his father and uncle were charged with the murder of his aunt in an honour killing.

Represented a client charged with attempting to pervert the course of justice as part of an 8 handed organised crime group. The allegation concerns the dissipation of restrained funds through bank accounts opened specifically to defeat the restraint orders imposed upon suspects in an ongoing cash-for-crash fraud investigation.

Robert is a member of the Criminal Bar Association and is authorised by the Bar Council to undertake Direct Access work.

Robert is also very proud to be Chair of Governors at an Ofsted ‘Outstanding’ all-through Academy situated at the heart of one of the most ethnically diverse and socio-economically challenged communities in the country.

Robert is a member of the Criminal Bar Association and is authorised by the Bar Council to undertake Direct Access work.

Robert is also very proud to be Chair of Governors at an Ofsted ‘Outstanding’ all-through Academy situated at the heart of one of the most ethnically diverse and socio-economically challenged communities in the country.