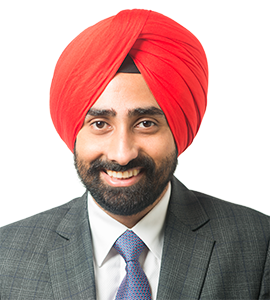 Sherbir Panag is the chair of Panag & Babu’s, internationally acclaimed and highly respected – Compliance and Investigations Practice.  Sherbir has deep experience in defending multinational companies  and conducting internal investigations in matters involving criminal and regulatory proceedings, as well as counselling clients on navigating India in a compliant manner. Sherbir’s practice has consistently been listed as a market leader for white collar crime in India and is ranked  by Who’s Who Legal, Global Investigations Review, Chambers & Partners and the Legal 500.

Through the course of his career, Sherbir has helped multinational companies across sectors, address their complex and sensitive issues. Sherbir has led investigations and acted as defence counsel in some of India’s most high profile cases, which have also had an interplay with law enforcement in the United States, Europe and Asia. These matters have involved allegations of bribery and other misconduct under Indian and foreign anti-corruption laws such as the U.S. Foreign Corrupt Practices Act, U.K. Bribery Act; financial and regulatory fraud (e.g., non-performing assets / loan impairment, tax evasion, insolvency and bankruptcy proceedings); procurement fraud; infrastructure fraud (e.g., misuse of development funds sanctioned by multilateral development banks); violation of sanctions laws; and violation of corporate governance and corporate policy norms.

Sherbir is a Senior Fellow at the Wharton School’s Carol and Lawrence Zicklin Center for Business Ethics Research and is a member of Cornell University’s – Meridian 180. He regularly lectures and writes on subjects on the subject of white-collar crime, compliance and business ethics.

Sherbir is a member of the Forbes Business Council and also of the Bureau of Indian Standards committee drafting an India anti corruption standard. He was formerly part of the International Bar Association’s anti-corruption expert group that made a submission on Australia’s foreign bribery laws to the Australian Senate Economics Reference Committee. Sherbir also served as the Vice Chairman of the Alliance for Integrity’s Advisory Group an initiative by the Deutsche Gesellschaft für Internationale Zusammenarbeit’s (GIZ).

Prior to founding the Law Offices of Panag & Babu, Sherbir was a partner at MZM Legal in Mumbai and served as a Director of the Roxin Alliance.

Listed by Who’s Who Legal and Global Investigations Review as a Thought Leader for Business Crime Defence (Corporates) in the WWL: Thought Leaders – GIR 2019 and 2020.

‘A master at his craft with deep knowledge of the law’

‘My first choice for referrals in criminal matters’

Extradition Guide for India, published by the Global Investigations Review

Where India’s Companies Act meets the FCPA, published by Law 360

Differences in the Application of the Attorney-Client Privilege in Different Jurisdictions and the Impact on Global Internal Investigations, published by the Society of Corporate Compliance and Ethics

Lessons to Draw From the Mondelez FCPA Settlement for Dealing with Permits, Approvals and Licenses in India, published by the Society for Corporate Compliance and Ethics

Compliance Challenges in India: Why your program may not translate (Whistle- blower Complaints – Part 1), published by the Society for Corporate Compliance and Ethics

Compliance Challenges in India: Why your program may not translate (Effective Due Diligence Part 2), published by the Society for Corporate Compliance and Ethics

Recent Supreme Court Decisions and the Prevention of Corruption Act, published in the Afin Compliance Bulletin

Misconceptions About India’s Anti-Corruption Framework, published by the FCPA Professor

A focus on Indian pre-contract integrity pacts, published by the FCPA Professor

Navigating the gift, entertainment and hospitality landscape in India, published by the FCPA Professor

Challenges of arbitration in India, published by the Corporate Disputes Magazine

The growing need for criminal compliance, published by Legal Era

Legal Developments in anti-corruption in India, published by the Criminal Law Section of the International Bar Association

Mentions in the Press

Inside the thriving world of India’s private detectives, Business Standard.