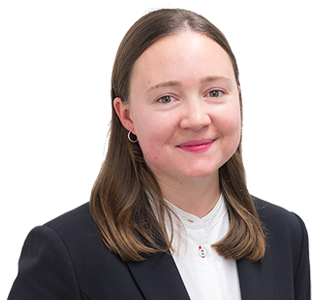 Kate joined Chambers in October 2019, following the successful completion of her pupillage. She is building a successful practice regularly appearing in the Youth, Magistrates’ and Crown Court for both the prosecution and defence. Kate also presents cases on behalf of the Nursing and Midwifery Council in fitness to practice proceedings.

After completing the Bar Professional Training Course, Kate worked at a specialist criminal defence firm in London. She specialised in confiscation law throughout her time at the firm and developed a detailed knowledge of the law relating to the Proceeds of Crime Act 2002. Kate also worked on extradition cases in the Magistrates’ and High Court.

Prior to starting pupillage, Kate spent six months interning at the Office of the Federal Public Defender in California and a non-profit organisation in Houston, Texas, assisting attorneys working on death penalty cases. Kate was involved at both the pre and post–trial stages, collecting evidence and visiting clients on Death Row. Most notably, Kate assisted attorneys with a successful application for a stay of execution in a case involving false testimony.

Kate has also volunteered at the Personal Support Unit, assisting litigants in person in civil and family law matters. She has experience dealing with vulnerable witnesses and defendants attending court for the first time, and has completed the vulnerable witness training organised by the Inns of Court College of Advocacy (ICCA).

R v PK (Uxbridge Magistrates’ Court, 2019) – Secured acquittal for a youth accused of assault by beating on the basis of mistaken identification.

R v PK (Uxbridge Magistrates’ Court, 2019) – Defendant acquitted after trial of assault by beating following cross-examination of the complainant on the basis of false allegations made during the breakdown of her relationship with the defendant.

R v RBC (Stevenage Magistrates’ Court, 2019) – Instructed to prosecute a vulnerable defendant assisted by an intermediary throughout the week-long trial. Kate was praised by the magistrates for her sensitive cross-examination of the defendant.

R v NA (Kingston Crown Court, 2020) – Prosecuted an Uber driver for exposure contrary to section 66 of the Sexual Offences Act 2003 described by the sentencing Judge as “one of the worst cases of exposure I have come across”.

R v CK (Southend Magistrates’ Court, 2020) – Persuaded the Judge it was in the interests of justice to move outside of the Sentencing Guidelines and impose three penalty points, instead of six, which would have resulted in the defendant having her driving licence revoked under the Road Traffic (New Drivers) Act 1995 requiring her to re-pass her driving test in order to obtain a new driving licence. The defendant therefore retained her driving licence and received a small fine.

R v BN (St Albans Crown Court, 2020) – Instructed to represent a teenage defendant facing trial for assault with intent to rob and affray. Persuaded the prosecution to offer no evidence on all counts on the indictment following written representations, despite multiple previous reviews concluding that it remained in the public interest to prosecute.

R v PC (Isleworth Crown Court, 2020) – Secured a suspended sentence of imprisonment following a defendant’s guilty pleas to two offences of racially aggravated harassment and an assault on an emergency worker, arising out of an incident at Waterloo train station, despite him having over 100 previous convictions.

R v HR and R v RB (Willesden Magistrates’ Court, 2020) – Secured the acquittal of two defendants in two separate cases arising out of a dispute at a local mosque, despite CCTV footage purporting to show the offences being committed.

R v PG (St Albans Crown Court, 2021) – Successfully defended PG who faced trial for assault occasioning actual bodily harm and possession of an offensive weapon on the basis of self-defence. Close analysis of CCTV and dashcam footage resulted in inconsistencies in the complainant’s account being exposed and the prosecution offered no evidence. PG received a short, non-custodial sentence for related, remaining offences.

R v AE (Harrow Crown Court, 2022) – Junior counsel in a possession with intent to supply a controlled drug of class A trial lasting 8 weeks. AE was unanimously acquitted of all charges after successfully raising a defence under section 45 of the Modern Slavery Act 2015. The case involved careful navigation of decisions made during the National Referral Mechanism process and expert psychological evidence following the decision of the Court of Appeal in Brecani [2021] EWCA Crim 731, and analysis of over 80,000 pages of evidence served during the first week of the trial. Subsequently persuaded the prosecution to offer no evidence in similar allegations AE faced before Snaresbrook Crown Court.

Nursing and Midwifery Council v SH (2022) – Fitness to practice proceedings against a nurse alleged to have dishonestly submitted timesheets for shifts she had not completed. The proceedings involved complex legal argument on the admissibility of hearsay evidence and whether there was a case to answer. Kate called 10 witnesses during the course of the three week long proceedings, at the end of which all 22 charges were found proved and the nurse was struck off.