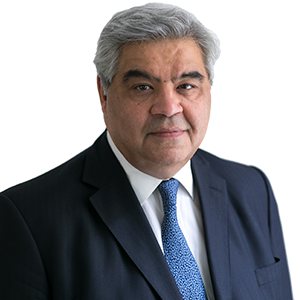 ‘He is a brilliant advocate, extremely hard-working, thorough, has a delightful manner and is a complete all-rounder.’

Mukul Chawla is a recognised leader in complex financial litigation of a criminal and regulatory nature.

Mukul was shortlisted for Crime Silk of the Year 2012 by Chambers Directory and, in 2015, was winner of that award.

He has experience in prosecuting and defending the most serious allegations of fraud, corruption and allegations of insider dealing; and of advising companies and individuals on a wide range of criminal and regulatory matters including Financial Services, compliance with the Bribery Act 2010, internal investigations, export and trade control compliance and anti money-laundering compliance.

He has been instructed in disciplinary proceedings instigated by the Financial Reporting Council in relation to accountants and actuaries.

He undertakes, whether as defender or prosecutor, all types of criminal cases including homicide and health and safety cases.

From October 2018 to January 2022, Mukul was a Partner and Head of the White Collar group in the London office of International law firm, Bryan Cave Leighton Paisner LLP. During that time, he advised companies and individuals in all areas of financial crime compliance, conducted investigations for companies around the world and represented companies and individuals in investigations conducted by the FCA, HMRC and the police. Since his resignation as a Partner, he retains a Consultancy position at BCLP.

‘A very experienced QC, who has decades of experience in defending and prosecuting some of the country’s most complex matters.’

‘He is a brilliant advocate, extremely hard-working, thorough, has a delightful manner and is a complete all-rounder.’

‘Mukul Chawla QC’s ability to navigate the complex areas that cases raise before a lay client and jury are unrivalled.’

‘He’s a very, very polished performer who has a nice understated style which appeals to both judges and juries.’

‘He is extremely hard-working and has a velvety smooth advocacy style that wins over judges and juries.’

‘He is a very effective advocate who is very charming and persuasive. He also has a good client manner.’

‘He has a wonderful ability to deal with very large and complex matters and represent them brilliantly in front of the jury.’

‘A formidable presence in court.’

‘Excellent on paper and on his feet, he is widely revered as a ‘powerhouse.’

‘A delightful opponent and very able, he is very laid back and has a charming advocacy style, which is a real asset.’

‘A very able and persuasive advocate with great presence. He would instil complete confidence in any tribunal.’

Mukul defends and prosecutes in equal measure across the range of criminal cases including homicide, offences against the person, health and safety, breaches of export controls and offences of dishonesty.

The principal focus of Mukul’s practice lies in ‘white collar’ crime. He has represented defendants facing trial for fraud of every variety, insider dealing and corruption. He regularly advises companies and individuals facing investigation by the SFO, FCA and HMRC. He has prosecuted cases involving LIBOR manipulation (including the first two prosecutions ever mounted), corruption in the energy and healthcare markets and tax frauds. His defence work encompasses fraud, corruption, tax evasion, insider dealing and export control breaches.

A growing part of Mukul’s practice involves advising companies in relation to money laundering compliance, bribery and export control. He has also provided criminal and regulatory advice to companies involved in mergers and acquisitions.

Mukul has, for many years, advised and represented police officers facing misconduct proceedings. More recently he has acted for the Financial Reporting Council in investigations and proceedings involving accountants and actuaries.

Mukul has advised (both as part of the prosecution of cases and as discrete issues) in Mutual Legal Assistance involving both the provision of and the request for assistance from jurisdictions around the world.

Mukul has some experience of conducting cases in the High Court in areas of Mutual Legal Assistance and as a Special Advocate.

Mukul was formerly standing counsel to HM Customs and Excise and has utilised his knowledge of tax litigation (in particular in relation to VAT and excise duty) in proceedings before the Upper Tier and First Tier Tribunals.

R v Thompson-Hill and others (June 2018 to August 2018) – Prosecuted 3 defendants for an execution-style murder by shooting and perverting the course of public justice.

R v Peters (April 2018) – Prosecuted the father of a seven year old daughter who committed murder by strangling her.

R v Oliver-Rowland and others (January to March 2018) – Prosecuted 5 defendants for the murder of a 15 year old boy.

International Arbitration at LCIA (2017) – Represented a Global oil-services provider successfully defending a multi-million dollar claim on the basis of illegality.

R v Tappuni (May to July 2017) – Prosecuted a consultant to the World Bank for corruption of healthcare contracts in Eastern Europe and Central Asia with a value of some £43million.

R v R and others (September 2015 to January 2016) – Prosecuted, for the SFO, 6 interdealer brokers at ICAP, R P Martin and Tullett Prebon charged with LIBOR manipulation.

R (on the application of Al Fawwaz) v Sec of State for the Home Department (December 2014) – Acted for the Home Secretary in the first case to be heard and concluded under the provisions of Part 2 of the Justice and Security Act 2013.

Financial Reporting Council v Mazars and Karmel (Summer 2014) – Acted for Executive Counsel of the FRC in proceedings relating to arrangements to substitute an Employee Pension Scheme. Proceedings settled shortly before the hearing of the complaint.

R v Hyde (October 2012) – Prosecuting an arms dealer charged with the illegal brokering of 80,000 semi-automatic firearms and 32,000,000 rounds of ammunition from China to Nigeria. Defendant convicted.

R v H (April 2012 to June 2012) – Defended Head Trader of Blue Index (a derivatives brokerage) charged with Insider Dealing. Only the second case prosecuted by the FCA in which Defendants have been acquitted of Insider Dealing. (The first was in 2010 (R v M) in which he also defended.)

R v S (March 2012) – Defended General Secretary of the Union of Democratic Mineworkers on allegations of theft from a Miners charity of which he was a trustee. Defendant acquitted.

R v Rybak and others (September 2011 to January 2012) – Prosecuted 5 defendants for the SFO for corruption in relation to oil and gas engineering contracts in Iran, Egypt, Russia, Singapore and Abu Dhabi. Contracts corrupted valued at £70m. 4 of 5 defendants convicted, jury unable to agree on the 5th.

R v M (2010) – defended a solicitor charged by the FSA with insider dealing. This was the first criminal prosecution for insider dealing in which the defendants were acquitted.

R v Bright and others (2007) – defended the Finance Director of Independent Insurance which collapsed in 2001.

R v W and others (2003 to 2005) – defended one of the principal Defendants in the Jubilee Line Fraud and Corruption trial.