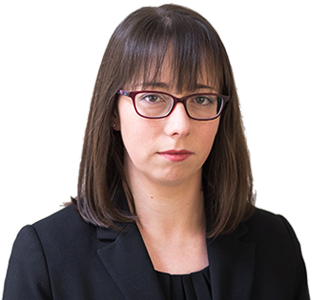 Natalie McNamee is a meticulous and skilled advocate with an excellent track record of dealing with cases well above her level of call. She has a mixed practice, encompassing criminal prosecution and defence, fraud and financial crime, extradition, tax litigation, business regulation and local government work. Financial crime is her particular specialism, and she acts for both prosecution and defence in complex fraud trials.

Natalie has been ranked as a Band 3 Leading Junior in the Legal 500 for Fraud (Crime) for two consecutive years:

‘Natalie is prodigiously hard working and an excellent lawyer. She has a very good manner with juries and presents complex financial information in an effective way.’

‘Natalie is a dedicated and hard-working advocate who is fiercely committed to the interests of her professional or personal client. She is incredibly intelligent and comfortable with complex financial and expert evidence.’

Prior to joining Chambers, Natalie spent two years working at the Personal Support Unit, a charity which supports litigants-in-person in civil & family proceedings. She is, therefore, particularly well-placed to represent clients who have never been to court before and are unfamiliar with the court environment.

Natalie is an experienced criminal practitioner. She represents defendants facing allegations of violence, dishonesty, drugs- and weapons-related offences, robbery and sexual offences. She has particular success in cases involving complex legal argument and crossover with other areas of law.

Natalie has a particular interest in cases involving defendants with mental health issues and those who are unfit to plead, and has appeared in several hearings under s 37 of the Mental Health Act.

She has completed the ICCA Vulnerable Witnesses Training programme.

Notable cases in this area include:

R v M (Harrow Crown Court) – Represented a man alleged to have sexually assaulted his 15-year-old niece. Prosecution offered no evidence after the first jury were unable to reach a verdict following an 8-day trial.

R v R (Isleworth Crown Court) – Successful defence of a young mother of good character alleged to have been the getaway driver for a violent aggravated burglary in which an emerald valued at £30,000 was stolen. Her co-defendants were sentenced to a combined total of 27 years’ imprisonment.

R v M & Others (Basildon Crown Court) – Junior counsel for the third defendant, led by Anu Mohindru, in a people-smuggling trial arising out of the discovery of 35 clandestine entrants in a shopping container at Tilbury Docks. Represented the third defendant at his trial in June 2015, his re-trial in May 2016, and his appeal against sentence in the Court of Appeal.

Natalie has extensive prosecution experience, both as a led junior and junior alone. She is highly sought-after to prosecute complex, multi-handed fraud, firearms and drugs cases.

Natalie is a member of the SFO ‘C’ Panel, the CPS General Crime Panel (at Level 3), and several CPS Specialist Panels. She also is instructed by the Royal Mail and local authorities to prosecute dishonesty, trademarks and environmental offences. She has been instructed as Independent Counsel and Disclosure Counsel by both HMRC and the Serious Fraud Office.

Notable cases in this area include:

R v A & 5 others (Isleworth Crown Court) – Junior counsel for the Crown in the prosecution of six defendants charged with attempted murder and various firearms offences, arising out of a shooting at Isleworth train station.

R v M (Blackfriars Crown Court) – Junior counsel for the Crown in the prosecution of a mother charged with offences of child cruelty against her infant daughter. Case involved analysis of complex medical and psychiatric evidence from over 60 medical professionals (including Neurologists, Dieticians, Consultant Paediatricians and Psychiatrists).

R v A (Kingston Crown Court) – Sole counsel instructed by the Royal Mail to prosecute a postal worker who stole high-value mobile phones from the post and used them to make expensive international calls. Defendant convicted on a 12-count indictment after a two-week trial.

R v K & B (Kingston Crown Court) – Sole counsel instructed by the Royal Mail to prosecute two postmen charged with a conspiracy to steal financial and banking information from the post.

Natalie specialises in the prosecution and defence of fraud and financial crime. She is ranked as Band 3 Leading Junior in the Legal 500 for Fraud (Crime). She is appointed to the SFO Prosecution ‘C’ Panel and the CPS Specialist Fraud Panel at Level 3. As a fraud practitioner, she is known for her meticulous case preparation, attention to detail and sheer hard work. She is instructed in cases prosecuted by the CPS Specialist Fraud Division, the Serious Fraud Office, the Financial Conduct Authority, HMRC and local authorities.

R v BC and Others (Blackfriars Crown Court) – Junior counsel for the first defendant, led by Alastair Smith, in an 11-handed mandate and diversion fraud. The total value of the fraud alleged was over £10 million, and the complainants included Etihad Airways and pharmaceutical company Eli Lilly. The trial (which lasted six months) involved substantial legal argument about disclosure, late service of phone download material and the scope of the fraud alleged by the prosecution. It also involved complex banking evidence and technical evidence about phone and computer downloads.

R v D (Swindon Crown Court) – Represented a defendant said to have defrauded her elderly relative of over £100,000.

R v A & Others (Southwark Crown Court) – Second junior counsel for the Crown, led by Alexandra Healy QC, in an SFO prosecution of six defendants who committed a £5 million fraud on a government apprenticeship funding scheme. The trial lasted 5 months, involved over 250,000 pages of evidence, and attracted national press attention.

R v B, B & M (Woolwich Crown Court) – Junior counsel for the Crown, led by Henrietta Paget, in a 7-week trial of three defendants charged with a VAT fraud.

Natalie prosecutes and defends in confiscation proceedings in the Crown Court, both as a led junior and junior alone. She is well-versed in applications for restraint orders, production orders and account freezing orders. Recent cases include an application to the High Court for a certificate of inadequacy in pre-POCA 2002 confiscation proceedings.

Natalie has a solid extradition practice and is regularly instructed in proceedings at Westminster Magistrates’ Court and the High Court. She is a member of the CPS Extradition Panel at Level 2. She is well-versed in the full spectrum of issues that arise in Part 1 extradition matters, and also has experience of dealing with Part 2 cases.

Cases of interest include:

Poland v ZZ – Represented Z (both at Westminster Magistrates’ Court and on appeal to the High Court) who contested his extradition on the basis that he had been placed in a witness protection programme and his life would be endangered if he were returned to Poland.

Poland v KL – Represented the Polish authorities in the High Court on an appeal by KL, who called expert evidence to demonstrate the damaging impact that extradition would have on his son.

She is currently instructed to represent the Romanian authorities in a case involving expert evidence about Romanian prison conditions and the validity of assurances from the Romanian government.

Natalie is regularly instructed by Local Authorities to prosecute cases of dishonesty, environmental, regulatory and trademarks offences. She has experience of dealing with planning offences in the Crown and magistrates’ courts, and has recently appeared at a hearing before the Planning Inspector.

She has represented a local authority who were the subject of a private prosecution for statutory nuisance, and she is currently instructed to prosecute an unusual case involving a substantial alleged breach of a Tree Preservation Order.

Natalie is regularly instructed by the Home Office and HMRC to appear in condemnation and cash forfeiture proceedings in the magistrates’ court. She has experience in the First Tier Tax Tribunal.

Natalie was recently instructed by HMRC to deal with a contested application for a production order.

In 2018, Natalie carried out advisory work arising out of the Grenfell Tower Inquiry.

She has also provided extensive written advice to Ofqual on the implications on new legislation.

Between October 2013 and April 2014, Natalie was seconded to Field Fisher Waterhouse, solicitors to the Hillsborough Inquests. She was part of a team of junior counsel who reviewed documents for disclosure to the 24 Interested Parties. She had particular responsibility for a tranche of documents requiring consideration of legal professional privilege, waiver of privilege, and medical confidentiality issues.

Natalie has advised clients and drafted letters before action in cases where a Judicial Review of a court or prosecuting agency was being considered.